Drones and unmanned aircraft in AEC scanning and construction

Six ways drones have proven themselves as a tool for the AEC, Surveying, and mapping industries

Drones and unmanned aircraft in AEC scanning and construction process are becoming more common.  Unmanned aircraft, or drones are becoming much more common on today’s project sites. many companies in the AEC, Surveying and mapping industries are utilizing these aircraft daily. So how do drones capture data? What are professionals getting out of said data? What makes a drone into a valuable tool versus a toy?

UAS technology has advanced to a point where the aircraft; while still very sophisticated, are quite simple to operate. They utilize; altimeter’s, magnetometers, inertial measurement units, GNSS (GPS) and radio transmitters to control the flight operations, but the end-user would never know it. These sensors and more are all managed behind the scenes so well that an operator can takeoff from any point, fly a “mission” which involves several tasks collecting data, avoid collisions from unexpected obstacles, know when they have just enough battery to return home safely and land all in a constantly changing environment, 100% autonomously starting from a single tap for initiation. Flying a drone is fun but unless you’re collecting data it brings no value. There are many sensors that can be attached to unmanned aircraft such as LiDAR and Gravitometers but in this article we are primarily going to address cameras and their use in Photogrammetry.

When you photograph an object from two different angles and add some Trigonometry, three dimensional measurements can be calculated.  The entire process is simple and automated.  A 3D model from aerial imagery is nothing new. Photogrammetry can be summarized as; the art, science and technology of making precise measurements from photos, and has been around since the mid 1800’s.

The whole process works like this: The distance (f) from a Camera Lens to its sensor is proportional to the distance (h) from said camera lens to objects being photographed. This property is written into several equations that photogrammetrists use to calculate things such as the scale of a photo and even the elevation of specific points or pixels in aerial photographs.

When two overlapping photographs are in correct orientation relative to each other, a Stereopair or Stereoscopic Imagery exists.  This imagery creates perspective on objects within the overlap of the photographs and is the principle behind all forms of 3D viewing.

As mentioned above, drone users can pre-program routes to fly over their intended mapping area. Photos are taken with specific overlap which is computed based on altitude, speed, and the resolution of their camera sensor. Drones use the onboard sensors like GNSS or even real time corrected positioning (RTK) to both georeference the photos taken, control the flight of the by changing the RPM’s of the individual motors. This data is all carried over in the image files where they are further processed.

Drones and unmanned aircraft in AEC and Construction:  Valuable Applications for AEC, Surveying, and mapping.

Surveying and Mapping. The use of drones and unmanned vehicles in surveying and mapping is almost self-evident. Surveyors and Cartographers have used Aerial Photography dating back about as far as the invention of the airplane. What may not be immediately apparent are the costs to purchase a survey-quality UAS and required software is a small investment in comparison to traditions surveying equipment and the man hours saved easily pays for itself.   Point Clouds and Orthometric photos are great for drafting planimetric features and generating TIN surfaces to represent topography. Whether you’re mapping for design data, a feasibility study, GIS, or performing an ALTA/ACSM survey, using unmanned vehicle to capture data may be significantly more efficient than traditional means.

Reality Capture, which is just that; capturing the reality of the current conditions of a project site. This is a great practice for design, bidding, marketing and simply helping clients “capture the vision.” This may be as simple as viewing an oblique photograph or as complicated as combining a designed structure with a 3D mesh and viewing it in VR. I personally get a kick whenever I see a IFC model inserted in a point cloud.

Building Information modeling (BIM). It would be hard to mention reality capture without mentioning BIM. While flying a drone indoors is doable its not very practical so this is not what we are referring to here. Many companies today, especially in the design-build world are utilizing BIM for much more than building modeling. They are integrating models in all their civil design as well.  These departments are already using laser scanning and are familiar with point clouds so adding a UAS into their tool chest is a natural move. Drones are great for capturing data that can be used for clash detection, QC, and as-built drawings.

Pre-Construction and Takeoffs are a major part of heavy civil construction. When it comes to moving dirt, knowing exactly what must be done can make all the difference in winning a bid, making a profit or losing your shorts. This is done when companies are bidding on projects, but the same process occurs over often in design builds and any time a RFI or change order comes up. Capturing data to that represent the existing site condition is key when building a model and matching existing roadway and other civil tie-in points. Using a drone is a great way to make this happen.

Project Management. Unmanned Aircraft may be utilized for many processes in project management. Creating progress reports and viewing current conditions may be the most basic use and might just be the most beneficial when it comes to decision making. Billing on some projects is solely based on materials moved and/or installed. This makes tracking linear feet, area, and volumes the bottom line. Some other overlooked uses may include, creating safety plans and incident reports, public involvement, and training. There are also various other project management uses above.

Inspections. Drones are one of the best tools utilized in inspections. Often an environment is not safe for a person such as inspecting a high wall in an open pit mine; or the situation may not be as efficient for an individual such as climbing versus flying to inspect bolts on a suspension bridge. When we apply the use of Infrared /thermals sensors to unmanned aircraft they are capably much more. Infrared light is absorbed by water making it possible to discover moisture that may be invisible to the naked eye. This is great for leak detection among other things. Thermal makes it possible to view and analyze heat signatures. This is often used to find areas of heat loss in anything from mechanical to thermal applications.

One of the biggest challenges today’s companies in the AEC, Surveying and Mapping industry face is a shortage of manpower. The only way to overcome a shortage in manpower is to innovate. Many choosing to innovate are looking to drone to solve their problems. Two trends I’ve noticed in helping companies develop their UAS applications is that they may start with a particular expectation in mind and one drone, but they always utilize their UAS data more than they anticipated and want to expand their drone fleet. I believe UAS technology is one of the best investments for a company in these industries to make. It is very apparent to me that Unmanned Aircraft are a major focus in developing technology. They are a powerful tool and not a toy.

Kuker-Ranken has been in business for nearly 100 years; Customer Service is our top priority, whether precision instruments, unmanned aircraft/drones, or construction support supplies.
Call us today for pricing on drones, training, and service! (800) 454-1310 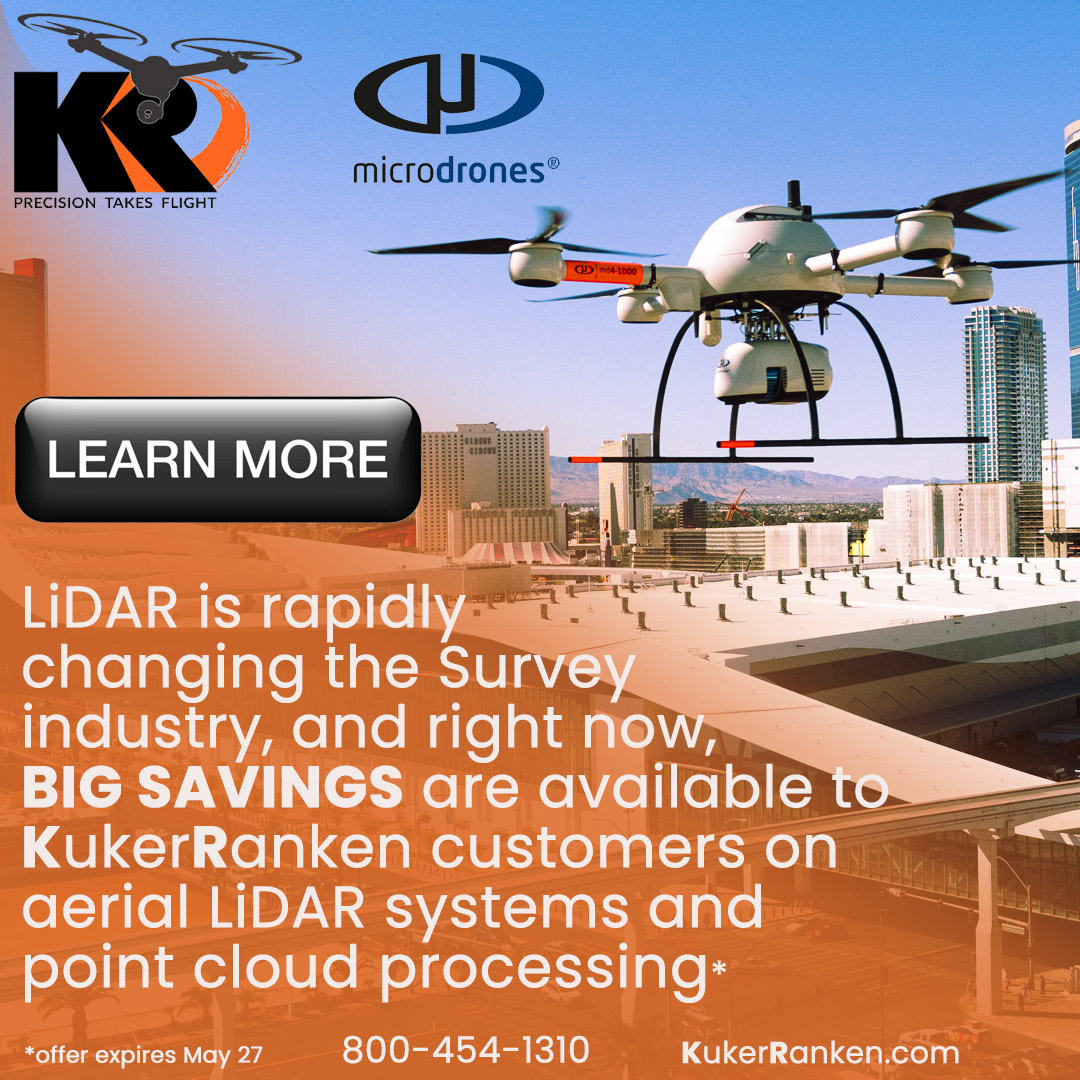